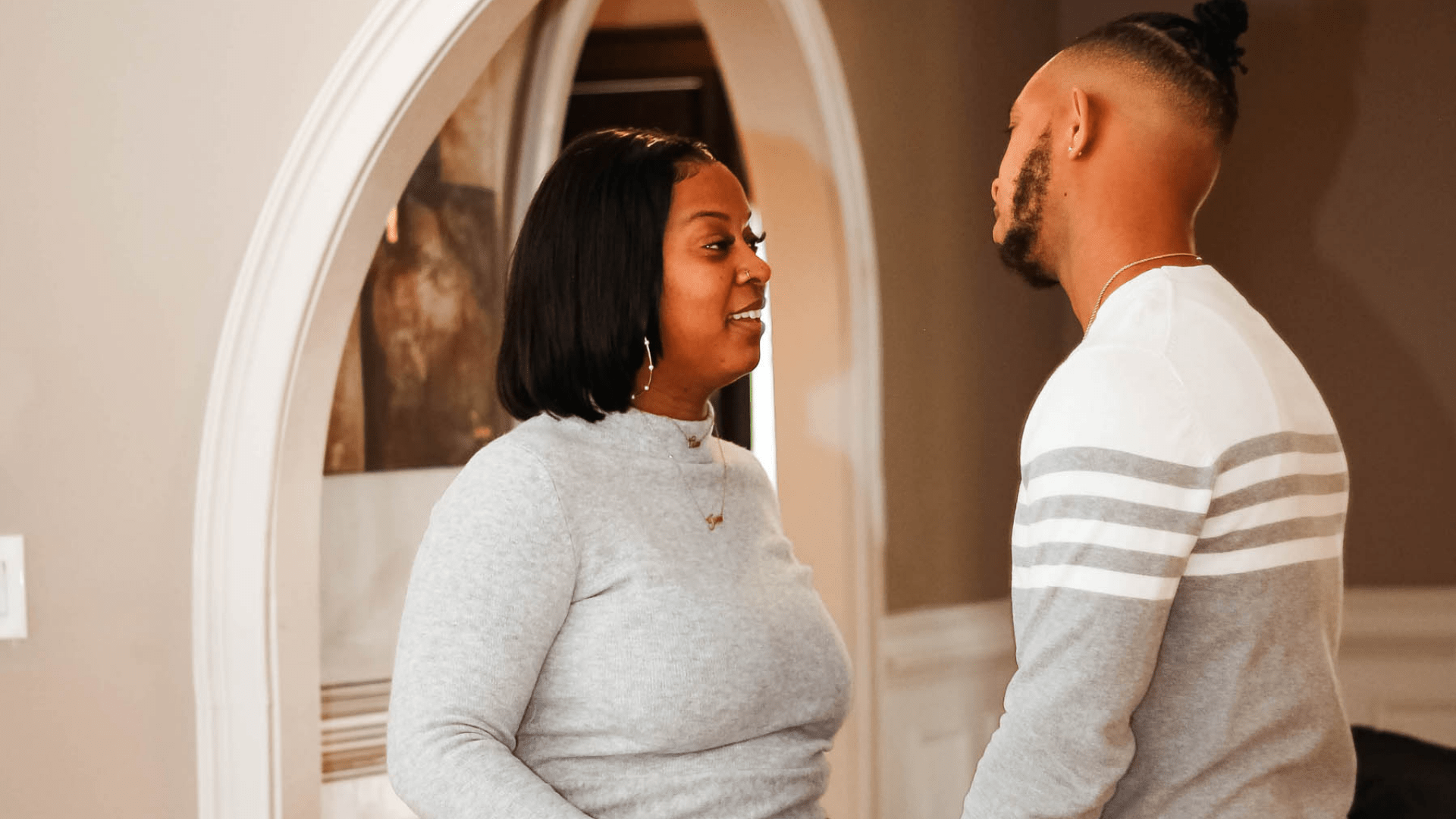 In this chapter, you will get some guidance on how to win the heart of your
Mr. Right. You can have the man of your dreams if you follow these simple
tips.

 How can you attract the perfect man?
 How can you get him to fall in love with you?
 What can you do to ensure that he doesn’t slip through your fingers?

You can find the perfect man and ensure that you stay with you for the rest
of your life. Love is a beautiful thing that makes life gain meaning. Don’t
miss out on a chance to find true happiness with your soul mate.

Sometimes when a woman meets her dream man, she somehow ends up
losing all her senses. Her life and happiness start to revolve around the guy.
He is always on her mind and she can’t wait to talk to him or see him.

This can result in her making constant phone calls or sending him texts or
emails. She may also try and see him every chance that she gets. It’s okay to
be head over heels for someone. However, be very careful not to lose them
by trying too hard to be with a man.

Try and remain independent. Concentrate on other things apart from him.
Keep in touch with your friends and go to work or school as usual. You have
to ensure that you have a life separate from him. If you keep trying too hard
to be part of his daily plans, you may scare him away fast!

Just because you have met a new man, doesn’t mean that you give up on
your individuality such as hanging out with your girlfriends.

Keep Some Mystery in The Relationship

You shouldn’t reveal everything about yourself when you meet a new man.
Keep some things to yourself to remain intriguing. You should also avoid divulging some sensitive information in the initial stages of dating. Telling him about an eating disorder that you used to have is a bit too much
information for someone you are just starting to date.

You don’t have to lie. You just have to know how much information is ok
and how much is too much. You can tell him all your secrets later on when
you have dated him for a lengthy period.

No matter how attracted you are to him, jumping into bed too quick is
never a good move. It will give him a bad impression of you. It may also
change the tone of your relationship. Instead of a commitment, he will be in
it just for the sake of having a good time.

Try and get to know him better without sleeping with him. Build the
relationship and work on your emotional intimacy before the physical
the aspect of the relationship is introduced.

Don’t jump into bed with a man too fast before you get to know them. This
will cause you some serious regrets.

Just because you don’t want to sleep with him yet doesn’t mean that you
can tease him or toy around with his emotions. Avoid dressing in a manner that is too provocative or too sexy. Don’t come on to him making sexual
overtures and then turn him down. Avoid heavy make-out sections and then
bailing out the last minute. All this will make him focus on sleeping with
you and once he succeeds with that, he will walk away. Don’t play such
games with a man that you are genuinely interested in.

Don’t tease him and play around with his emotions.

You may have been desperately looking for a man when he came along.
Maybe you have had bad luck in past relationships or have always had
problems finding a good guy. However, whatever your situation, you can’t
show signs of desperation. Telling a man just how long you have been
single and searching isn’t a good tactic.

You should also avoid showing him that you need him so much. No matter
how difficult things may be in your life, you can’t show him that you need to
be saved. His money and looks shouldn’t be your main area of interest. No
man likes to feel like they are being used in any way.

Show Him That You Value Him

It may be hard to adjust your life to let in a new man especially if you have
been single for a lengthy period. You may find it hard to be able to
change your daily schedule to leave room for your new man. Maybe you were used to being with your friends and spending the rest of the time at work. However, once you meet a new man, you have to adjust things and make room for him.

Avoid things such as using your phone too much when you are with him
even if they are important to work calls. Try showing him that you value him
without being overbearing. You don’t have to give him your attention
throughout the day; you just have to do simple things that show that you
care. For instance, text back when he texts you no matter how busy you are.

Pay Attention to Your Looks

Many times a woman will only pay attention to her looks when she is trying
to catch the attention of a man. She will wear nice clothes, put on some
makeup, and get her hair done.

However, once he starts showing some interest, a woman gets so
comfortable that she starts to let herself go. She starts wearing clothes that
aren’t flattering and makeup becomes something that is worn only once in a
while. This isn’t good. If you are trying to attract a man and keep him
around, you have to take care of yourself to keep him interested.

Ensure that you look good even when you are hanging out with him
indoors. You can relax on your looks once you are married or have been
dating for a year or so.

Keep looking fabulous and you will have him attracted to you long enough
to have him falling in love with you.

You don’t have to reveal all your secrets to him in an attempt at openness.
You just have to give him your opinion and share it with him without being
cocky or too revealing. Men are attracted to women who have their
minds and can speak up for themselves. If you don’t agree with something,
don’t be rude or argumentative; just clearly express your disagreement. No
man will be attracted to a doormat. So don’t be one.

Don’t lie to him. This can ruin any relationship. If he asks you something
that you aren’t ready to talk about, just tell him this without lying.
However, it is something very important then than you better tell him the truth.
If you have a child with another man, don’t hide this. You should be upfront
with him. Some men are okay with dating single moms while others aren’t
so avoid withholding such information.

Don’t try to get a man to fall in love with you by trying to be some else. For
instance, if you don’t like sports, you don’t have to lie about being the
biggest baseball fan just because the man is into baseball. You should also
avoid trying to be the woman to who you think he might be attracted. He
may be attracted to Kim Kardashian but this doesn’t mean that’s who he

wants you to be. So be you and let Kim be Kim. Don’t change your dressing
or personality just to get someone to fall in love with you.

A man will be drawn to a woman who is confident and has her life together.
You can’t get confidence from a man. You have to be confident with yourself.
Trust yourself. Self-doubt shows in your personality and this can be
unattractive to a man. Although a man is supposed to do the chasing, this
doesn’t mean that you sit down passively and let him do everything. You
have to make a few moves. Sometimes come up with a plan and see if he
likes it. Doubting whether or not he will ever want to do what you want is
not going to get you anywhere.

Let Him Be the Man

This may sound strange but actually, it happens a lot especially with
independent women. They are so used to being on their own and relying on
their survival tactics. You have to learn to let him be the man and stop
questioning his ability to do things. If he offers to help you fix something,
let him do it. Suggesting that you can do it yourself or maybe call a
professional will just push him away.

Allow him to help you out with manly tasks such as changing the car’s tire.

Work On Your People Skills

You don’t have to work on your people skills only when you are working.
This is important even when you are dating. Don’t take for granted
simple things that you may assume to be obvious. For instance, some women like to talk a lot. This may have them interrupting a guy all the
time. If he is telling you something avoid things like,” That reminds me
of………” interruptions. Stop cutting in and just listen.

Learn what is appropriate and what’s not. Don’t just ask someone if they are
republicans or democrats right off the bat. Also, avoid making him feel self-conscious.

You can easily bore a man if you don’t talk at all. Learn how to hold small
talks. If you are on a date, keeping quiet and just staring down will easily
get your mind elsewhere. If he tells you a joke, laugh even if it’s not funny.
But don’t give a fake laugh that is too obvious. He may think that you are
making fun of him.

Above all, learn to listen to him. If a man is talking to you and you look
distracted, this may get him to shut up. Men like confiding in a woman who
can listen to them. Give them your undivided attention and this will make
them confide in you even more.

Pay attention and listen to him when he is talking to you.

Don’t Try to Buy His Affection

Many people assume that only men try to buy love without knowing that
there are women who also try out this approach. Trying to buy him gifts or
give him money will not work. It doesn’t matter whether or not you have
money and he doesn’t. A man who falls for theses tactic is only trying to use
you. He will not fall in love with you through such means.

A man who is courting you will be doing these things for you. He will pay
for dates; get you flowers and also small gifts. However, you don’t have to
return the favor and buy him a car! Bottom line is, it doesn’t matter what
you have and what you can do for him, and you just can use material things
to buy his affection.

The Benefits To Your Marriage Of A Great Sex Life

When is the Right Time To Be With Someone?